Call to participate in the Second Session

This call is addressed to all social organizations, groups and individuals wishing to participate in the drafting of a declaration against imperialist war and in support of an anti-war culture, from different fields and viewpoints, and to collaborate in the activities of the Permanent People’s Tribunal Against War and NATO (TPPCGIO).

The Tribunal will hold its Second Session in Madrid, on 18 and 19 June 2016. Its work will be organized around five Panels, focusing on the following political and social scenarios:

The Panels’ conclusions will be presented at the plenary session, which will discuss and approve the Second General Resolution of the Tribunal.

The goals of the Tribunal and the participation procedures are detailed below.

The Permanent People’s Tribunal Against War and NATO was constituted in Madrid on November 8th 2015 after three working sessions attended by more than 80 people from many parts of and from abroad.

The Constituent Sessions, which had followed on from the mobilizations against the NATO manoeuvres being held in Spanish territory, debated four thematic areas: “War and the media”, “Low intensity wars and coups d’état”, “NATO” and “Refugees”.

Following these debates, the TPPCGIO issued a General Resolution and a specific resolution for each of the subject areas.

The General Resolution condemned the main agents of imperialist intervention. It particularly condemned NATO, its allied States and its high commands, further pointing to the political, economic, and media agents responsible for spreading imperial war throughout the world, and their impunity. It also called on “to social movements and organizations to endorse these condemnations and mobilize in favour of the demands put forward here”.

In order to guarantee the continuity of the work done so far, in January 2016 it was decided to hold a Second Session in June; to that end five Working Groups were set up, focusing on the following issues:

These Working Groups have focused their efforts on describing the ways in which imperialist aggression has manifested itself in five “war scenarios”: four of these are “hot” regions, while the fifth relates to the scenario of the victims and refugees as a worldwide consequence of war which cannot be differentiated by regions.

The ongoing spate of wars continues to spread into ever more geographical areas as an instrument of the treat economic and financial powers, immersed as they are in a major systemic crisis of capitalism, which need imperial powers of control and dispossession to increase their profit margins.

The imperialist powers, grouped under their military alliance, NATO, are unwilling to negotiate their interests with other powers, and are increasingly violent in their determination to impose their own world view.

The absence of the USSR as a countervailing force has allowed the imperialists to follow a policy of boundless harassment, siege, and criminal assault against any peoples who attempt to follow their own path, using all kinds of coercive means, either directly or through proxies.

At the same time, within the imperialist metropolises the sectors most grievously hit by the economic crisis are immigrant populations, once useful as a workforce to enhance corporate profits but nowadays abandoned to their fate in a situation of growing marginalization and xenophobia in which the sickness of sectarianism is able to spread unchecked.

In this context we see the most extreme expressions of violent response, skilfully manipulated by the sponsors of imperial war in order to cow their own populations.

This feeling of fear is reinforced by the phantom of mass immigration by people who see no alternative but to escape the violence and misery created by the West.

Again, this fear is enthusiastically fuelled by governments and opinion-makers so as to justify the most drastic restrictions on democratic rights and freedoms ever seen, in a growing state of exception characterized by an arbitrariness typical of fascism, while at the same time extreme right movements continue to grow throughout Europe.

Given these circumstances, the TPPCGIO believes there is an urgent need to draw attention to the links between the dynamics of survival of a rampaging capitalist system and the most obvious effects this has on common perceptions: terrorism, mass migration, and generalized destruction and chaos.

We wish to make it plain that all this has not emerged from nothingness or as a consequence of peripheral peoples’ inability to govern themselves: it is the logical outcome of a self-destructive system and of the premeditated actions of imperial power centres aimed at sustaining that system, whose main agents need to be identified, exposed and condemned as the originators of all this crime and destruction.

The mere knowledge of these facts when they are presented in isolation does not enable us to grasp the real dimensions of imperialist war. We therefore seek to help raise people’s awareness by giving them the means to look beyond the mere repetition of slogans and commonplaces and by helping to forge an alternative discourse to that of the powers that be.

We call on all social organizations, groups and individuals who are willing to participate in the drafting of a declaration, against imperialist war and in support of an anti-war culture, from different fields and viewpoints, to take part in the work of the Permanent People’s Tribunal Against War and NATO.

The Permanent Peoples’ Tribunal Against Imperialist War and NATO is intended to serve as an observatory on war and on its causes, consequences and culprits. It will also serve as a channel for the creation of an archive to record the memory and the resistance of peoples against the barbarity of war.

In the conviction that war is not only a matter of armed intervention but of forcible subjugation by economic and political means that violates the right of peoples to exercise their sovereignty, the Tribunal seeks to embody and disseminate social and political condemnation of the situation created by military interventions.

2. Who is called on to participate:

All individuals, social organizations and groups who are willing to participate in the drafting of a declaration, against imperialist war and in support of an anti-war culture, from different fields and viewpoints

All those who wish to act as witnesses and testify to war crimes.

3. Registration and modes of participation:

4. Organization of the Tribunal sessions on 18 and 19 June. 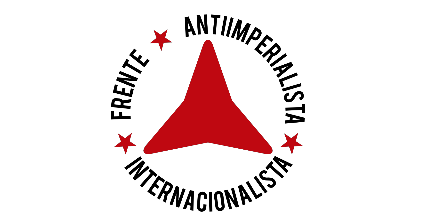